I’d like to think I’m not particularly fussy when it comes to picking books to read. That I like to read widely and experimentally. And while this is broadly true, it’s also fair to say that I am a judgemental bitch who definitely makes snap decisions about books without sufficient evidence to back up said decisions. So, in the interests of calling me out on this terrible habit of mine, here are my top ten book turn-ons for this week’s Top Ten Tuesday: the things that will make me want to read a book straight away, laid bare.

END_OF_DOCUMENT_TOKEN_TO_BE_REPLACED

I’ve been a lit major for nigh on six years now, and so I thought it only fair that I use this week’s Top Ten Tuesday ‘Back to School’ theme to share some of the wisdom I’ve managed to gain. So I’ve decided to share ten texts I think every new lit major should try and read at some point in their university careers. Don’t be alarmed if these texts at first seem unnecessarily confusing, pointless, and/or completely and utterly useless. That’s more or less precisely how they’re supposed to be.

END_OF_DOCUMENT_TOKEN_TO_BE_REPLACED

This post is a response to Pages Unbound’s Classic Remarks meme.

The Taming of the Shrew is Shakespeare’s family-friendly romp about a tough, street-wise hero who falls in love with and marries a fast-talking heroine. They decide to play an elaborate prank on their friends and family, so the pair pretend to hate each other and the hero torments the heroine, in order to highlight the atrociously misogynistic attitudes of early modern England.

Hmm. Maybe not so much. Although there’s been some debate about the extent to which Taming of the Shrew is in fact a misogynistic play (some people even argue that it’s just the opposite) I think it’s fair to say that it’s pretty problematic. It includes a great many jokes about women needing to be ‘tamed’, not to mention scenes of abuse: Katharina, the ‘Shrew’, is abducted and starved by her new husband Petruchio.

END_OF_DOCUMENT_TOKEN_TO_BE_REPLACED

This week’s Classic Remarks prompt from Pages Unbound is brought to you by Susan Pevensie, problem child of C.S. Lewis’ Narnia series. So, as you might expect:

Warning: major spoilers for the Narnia series ahead!

I always found the ending of The Last Battle so unbearably crappy and depressing. The Pevensies were in a terrible train accident and then got transported to the apocalyptic end of the Narnia they had known and loved to live in a suspiciously small-looking walled garden with all the people they’d met in Narnia, ever? (Remember, as a kid I had no idea that the series was an allegory, but even knowing that fact doesn’t make it any less of a crappy and depressing allegory.)

END_OF_DOCUMENT_TOKEN_TO_BE_REPLACED

If you’re a woman in 2016, chances are you’ve probably, at some stage in your life, seen a picture of another woman – whether it be in an advertisement, in a film, or just on the street – and thought, ‘Geez. She’s so much prettier than me’. You’ve probably done something painful or inconvenient or expensive to your body at least once – whether you’ve plucked, scrubbed, scraped, steamed, smeared, or even laid down on a table and let someone put a scalpel to your skin. And if you haven’t, then chances are you’re either: a) living outside human society as a cultureless hermit, in which case you probably won’t be reading this anyway, or b) you’re one of the rare people who are actually happy with their bodies, in which case I applaud you and beg you to kindly TELL ME HOW THE HELL YOU DO IT thank you please and kind regards.

END_OF_DOCUMENT_TOKEN_TO_BE_REPLACED

Apparently there’s this thing called ‘mansplaining’. It used to be Internet Speak; then it was Word Used By Journalists Desperate to Remain Relevant to Internet Speakers; and finally, in 2014, it was elevated to Word, thanks to its inclusion in the Macquarie Dictionary. And before there was ‘mansplaining’, there was ‘Men Explain Things To Me’.

Of course, I’ve heard the term a few times while browsing the Interwebs. But never having heard of Solnit’s essay, I thought that ‘mansplaining’ was a cute term for when men try and explain their supposedly incomprehensible actions to women. I thought it was the sort of thing that belonged to the world of sitcoms and similar: “No, babe, you don’t understand. Men watch sports because they don’t like knitting /cooking /shopping / insert condescending female stereotype here”.

END_OF_DOCUMENT_TOKEN_TO_BE_REPLACED

Am I a bad feminist? That’s probably the question a lot of people asked themselves when they saw the title of Roxane Gay’s essay collection Bad Feminist (2014). The insidious nature of contemporary sexism – veiled in ancient gendered representations, in advertising and the media, and in the rise of ‘irony’ as a catch-all phrase for dealing with accusations of misogyny – certainly makes it difficult to tell at all times whether sexism is actually happening, whether we’re unconsciously (or even consciously) accepting stereotypes of gender as they are handed to us.

The title of Roxane Gay’s collection of essays instantly intrigued me, because it seemed to be addressing this issue face-on. It seemed to be considering what it means to identify as a feminist in a world where a song about rape (‘Blurred Lines’) can be a chart-topper, and where young women can write on the internet about being perfectly willing to let a man beat them simply because he is a celebrity (which Gay addresses marvellously in an essay entitled ‘Dear Young Ladies Who Love Chris Brown So Much They Would Let Him Beat Them’). Existing in this kind of world as a self-identified feminist is tricky enough, but it doesn’t help when we are daily exposed to such content and, even worse, sometimes find ourselves humming the chorus of ‘Smack Ma Bitch Up’ (in case you can’t tell, my taste in music is almost pathetically out of date) without even realising.

END_OF_DOCUMENT_TOKEN_TO_BE_REPLACED

Stephenie Meyer’s new offering, Life and Death (2015), is intended to be a kind of addendum to her problematic series about teenage love in the age of vampirism, Twilight (2005). According to Meyer, the story is a kind of fictionalised response to the plethora of accusations of sexism that have been levelled at the Twilight series. By swapping the genders of almost all the characters in the original story, Life and Death is meant to show how problems with gender in the original series are actually problems that can be attributed to the main character’s humanity rather than her femininity.

Life and Death has been branded a lot of things: bungling, lazy, and just plain greedy. Most have greeted it with a rightful degree of cynicism, seeing it as a rather cheap way to make a bit of extra cash and rejuvenate a series that, ten years on, is beginning to look a little tired.

END_OF_DOCUMENT_TOKEN_TO_BE_REPLACED

Do you want to read about an old, respectable English spinster who moves to the country and sells her soul to the Devil to become a witch in the heady days of the 1920s?

Of course you do. It’s a fantastic idea. Forget great parties at Gatsby’s, I want to see an old English lady drop her drop-waisted dress and do Satanic dances on top of a hill. I want to see her chat with the Devil over tea and biscuits. I want it to be kind of like The Master and Margarita only less confusing.

And who knew that in between the two World Wars such a book was actually written? I couldn’t believe that this book existed, but I knew the minute I read about it in Samantha Ellis’ How To Be A Heroine that I had to find it. Quite how Lolly Willowes came into existence I have no idea. But I’m glad it did.

END_OF_DOCUMENT_TOKEN_TO_BE_REPLACED 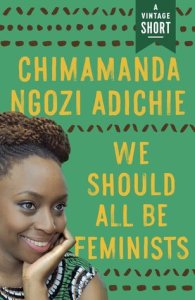 Not that I really needed convincing, but a book entitled We Should All Be Feminists seemed like a pretty perfect place to begin my goal to read more feminist literature in 2015. And given that International Women’s Day was two weeks ago, I thought I’d go ahead and write a little about this essay. At only forty-eight pages, there’s really no excuse not to read this short piece, which considers some of the reasons why feminism is still required in today’s world.

The text is an adapted version of a speech that Adichie gave a while back; perhaps for that reason it feels formal but still personal. Adichie’s style is readable and intelligent, and at no point did I find myself disagreeing with anything that she said in this essay.

Adichie begins by considering the fact that the word ‘feminist’ carries a lot of baggage, and that people are reluctant to identify with it because it has so many negative connotations.