Top Ten Tuesday is a weekly prompt at The Broke and the Bookish. This time the theme is ‘Top Ten Book Covers I’d Frame As Pieces of Art’. Now I’ll admit (a little shamefully) that I am a bit of a visual person, and I do tend to fall into the trap of judging a book by its cover. A lot. I know, it’s terrible. This week’s prompt, however, lets me indulge my shockingly bad habit, so I just couldn’t resist.

1. The Luminaries by Eleanor Catton. I’m a big fan of this style, showing only slices of the image instead of the whole thing: 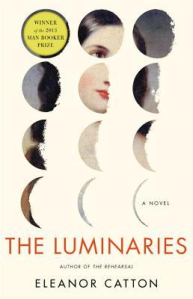 The lovely people over at The Broke and the Bookish clearly share my fascination with lists (seriously, I really like lists. I’m thinking of doing a ‘Why I Like Making Lists List’) because every week they run a feature called Top Ten Tuesday. There’s a new theme every time, and this week the theme is ‘Top Ten Popular Authors I’ve Never Read’. So I’ve decided to look at the ten popular (classics) authors that I have, for one reason or another, never got round to reading. Admittedly, not all of these authors could be classified as ‘popular’, but on the other hand, they’re the sort of thing people never stop talking about and always pretend they’ve read to impress their dates. So, here we go…