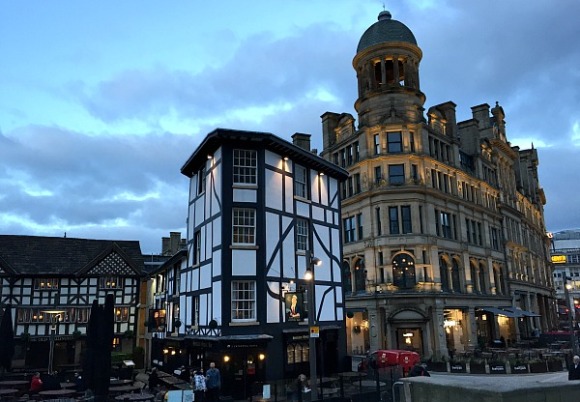 Welcome back to Lit Major Abroad, everybody, the segment where I post stories from my literature-inspired travels, usually about seven to thirteen months after said travels actually took place! Up next: an extremely belated description of a trip through Northern England. Warning: I will not divulge exactly when this trip took place. Suffice it to say that several seasons (as in, leaves falling to the ground, turning brown, and then growing on the trees all over again like those sped-up montages from the movies) have passed since this trip took place.

Like many readers of North and South, I had an idea of what Manchester would be like. Dirty and smoky, full of cramped streets and ugly factories that attested to a cruel age of economic power and social irresponsibility. I was influenced by things like the TV adaptation of Gaskell’s novel, and the experiences of family members who had been to the north of England (admittedly, several decades ago, when the English were considerably less on top of things as far as the aesthetic appeal of their cities goes). So when I decided to take a Gaskell-inspired detour through the north of England last year, I was sure I was heading towards a dirty, depressing industrial city.

I couldn’t have been more wrong. Manchester is a city that wears its industrial past on its sleeve; everywhere there are signs of the impact that industry had on the city. Old factories are renovated and turned into swanky apartment blocks. The centre of town is home to clean, bright, Victorian buildings that bear witness to the enormous wealth that industry provided to (some of) the citizens of what came to be dubbed ‘Cottonopolis’, because of the impact of cotton-weaving on the city.

Just outside the centre of town a collection of converted factory buildings has become the Museum of Science and Industry, which houses huge hissing engines and complicated mechanisms, all of which helped Manchester become, in the nineteenth century, one of the centres of industry. Walking past these enormous inventions, one doesn’t quite know whether to be amazed or horrified at the power and potential of human ingenuity.

On display are the many different machines used to convert raw cotton into fabric. Looking at some of the displays, it quickly became apparent to me that when it came to the cotton factories, women were by far the worse off; the jobs that they were allowed to do always came with lower pays and less prestige. But the other thing that crossed my mind, as I gazed down at the machines (fighting off the urge to do some Richard Armitage-inspired scowling as I did so) was how much skill and strength must have been required to work these massive machines. And yet the workers were paid pittance, scarcely enough to survive. Granted, they didn’t take this lying down: the strike in North and South highlights the difficulties that workers were trying to overcome.

On a Lighter (and Slightly Damper) Note

Later that day, I took a little side trip to a very different place: Lyme Park, the ancestral home of the Legh family (yes, the i is supposed to be missing. Chalk it up to the many eccentricities of the English aristocracy, along with super-fancy accents and considering hunting to be a classy sport). Its main claim to fame these days is the fact that it served as the exterior of Pemberley in the 1995 adaptation of Pride and Prejudice (or, as it’s affectionately known, the ‘Wet Shirt Show’). And, if I’m being completely honest, this was the major reason for my decision to go and see it. I know, I know, I’m a massive nerd, especially considering that the place doesn’t have any hard and fast literary connections – although it does contain a very special book, the first book to be printed in England with two colours (rather than just black), by the well-known printer William Caxton. See? I didn’t just go because of Colin Firth/Darcy fangirling, I swear!

Lyme Park is only about an hour by train and foot from Manchester, but it’s like a whole different world. Set amidst rolling moorland, the house appears majestically in a valley as you approach it. It’s built out of an attractive greyish brick in an imposing style, and I have to say that Pride and Prejudice links notwithstanding, it is a beautiful place. Probably even prettier in the summertime, when the garden is in bloom, but stunning nonetheless. It’s amazing to think that while all the hustle and bustle of industry was taking place in Manchester, this elegant and peaceful spot was here the whole time, such a contrast from the life lived in the city.

My final destination in Manchester was Elizabeth Gaskell’s house. I read about the renovation of this middle-class Victorian home back while I was still in Australia, and put it down on my To-Visit list straightaway.

I love visiting writer’s homes because it’s always a treat to actually see the spaces where your favourite books took shape. It’s not necessarily that there’s anything particularly mystical about them, or anything like that, but it’s always interesting to think a little bit about the mechanics, the realities, of the act of writing.

Gaskell’s house in Manchester has been extensively renovated. Because her daughters died at the turn of the century, the house and its contents were auctioned off, so what is in the house at the moment is an approximate recreation. It contains a mixture of antiques and reproductions, and thus far only the ground floor is furnished, as well as the basement and the garden, although the basement just contains a small and very sweet tea room.

Upon entering the house, the volunteer at the counter invited everyone to ‘feel at home’: sitting in chairs, touching books, chilling in the rooms – it was all, seemingly, permitted. I’ve never been to a museum that is quite so relaxed about its furniture and objects, and before long I found myself torn between the desire to sit and leaf through books in the study, and my inability to turn off ‘Museum Mode’, which is where you live in perpetual fear of backing into a priceless ceramic urn and accidentally converting it into a priceless pile of rubble, and therefore walk around on tip-toes from room to room, knowing full well that most of the items you are examining are worth about twice what your own, miserable existence is worth.

I overcame my fear eventually, sitting in a very comfy chair and playing with the music-box that was positioned on the shelf (it played some traditional songs from the vicinity in a reedy but enthusiastic way) and had a cautious leaf through a book entitled The Lancashire Witches, the title of which sounded sufficiently compelling that I was willing to risk a stern telling-off if it transpired that I was, in fact, leafing through a Precious Book Worth More Than A Year’s Rent. Nobody came to tell me off, so I presumed I’d either done what the museum curators wanted or gotten away with something incredibly naughty.

The entire house was very nicely furnished, and in the dining room there was a table positioned in the spot where Gaskell usually wrote. On the table were photocopies of letters to Gaskell from Dickens and Charlotte Brontë, so if you felt in the mood you could sit down and pretend that the most famous writers of the Victorian era were your devoted correspondents.

The Gaskell House is clearly still a work in progress – the upstairs has yet to be completed and there’s talk of setting up a bedroom once the funds are available, but what is there has been nicely restored and well-presented. The idea of being able to feel at home in a famous author’s house is a tempting one (on a side note, I believe that the house that Harriet Martineau built in the Lake District is actually a holiday home these days, although Martineau was a bit of a snob whenever she went travelling, so I’m not sure what she’d make of that). What’s most amazing about the house is how different it is from the kinds of conditions that would have been experienced by the working classes; in a well-developed, neat middle-class community removed from the heart of Manchester, Gaskell nevertheless found it easy to evoke the conditions of the Manchester slums and factories. Although she lived in a pretty, well-to-do house, it’s clear that Gaskell never lost her sense of social justice, and managed to convey both the struggles and the occasional joys of life in ‘Cottonopolis’.

9 replies on “Two Days in Manchester: Plus, Mr Darcy Fangirling”

What a fascinating post!!! I just love reading about literary places. I have a series on my own blog in the same vein, actually (though I haven’t posted one in a while because I haven’t traveled to a literary place in a while!). I studies abroad in Bath and took a Jane Austen course there, which was incredible. This post made me miss that! I’m so jealous you got to see “Pemberley,” that’s totally enough reason to visit, haha! I also loved “North and South” and should really watch the show. Wonderful post, can’t wait for more like it!

I love your travel posts no matter how late they arrive! :) This made me want to read North and South again as well as visit Manchester.

Haha, thanks Lory! Writing it made me want to reread it too. :)

I’m loving your literary travel write-ups, I almost feel as though I’m there.