I’m not exactly known for being the most up-to-date when it comes to posting my book reviews. This is usually because I’ll finish a book, write a review, and then let it sit on my hard drive for months, until I finally remember to post it up, usually about two years after I wrote it (and that’s not even an exaggeration). In the case of The Moonstone, however, I made the crucial mistake of reading it in November last year and avoiding the writing of the review itself (and only about ninety-five per cent of the reason is because I didn’t have anything particularly interesting to say about it. The other five per cent is, predictably, that I’m just lazy).

So when I finally came to write this review, I couldn’t remember a darned thing about the plot, characters, or themes. Which is especially concerning considering I also watched the 2016 BBC adaptation of the novel, and still can’t remember anything beyond the fact that the guy who plays Godfrey Ablewhite has fantastic cheekbones, and that Sarah Hadland can still make me laugh. So if you’re hoping for an in-depth postcolonial reading of Collins’ novel, I’m afraid I’m going to disappoint. But if, like me, you are a newcomer to The Moonstone, you may find the following facts, dredged only by dint of great effort from the quagmire of my brain, to be quite useful.

All the Things I Remember About Wilkie Collins’ The Moonstone

1. The Moonstone is basically a book about a bunch of white people who lose something that never really belonged to them in the first place, and for some strange reason get quite upset about this.

2. In the interests of proving that I did, in fact, read the book, whatever my shoddy summary may suggest, I would like to point out that the lost (or, rather, stolen) item in question is a big fat diamond that some Major in the British Army nabbed while he was in India. (See? I totally read it!)

3. The main character’s name is Flynn. Or Fitzgerald. Or Fortescue? I cannot stress enough how long ago I read this book.

4. Also, he’s in love with a girl who is definitely in the running for Most Boring, Soppy Victorian Heroine of All Time. I want to say her name is Ramona.

5. The book is structured like a collection of witness accounts from various people, including family servants, lawyers, random relatives, and the hero himself, who compiles the entire book. (His name’s definitely Finn. I’m sure of it.) If you want to take the cynic’s view, this could mean that the hero actually manipulated the accounts and is, in fact, the real thief. DUN DUN DUN. Admittedly, I may be reading a little too much into it.

6. Also, this is reputed to be one of the earliest detective novels. Pretty impressive, right? So if you’re up late at night, reading heart-pumping literature about street-hardened Afghanistan veterans chasing down brutal serial killers across the alleyways of New York, you know who to thank: Wilkie Collins, who two hundred years ago wrote a novel about a bunch of rich English people who lose a big fat diamond and spend way too much time obsessing over it. 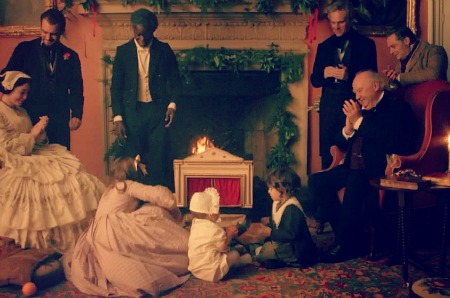 7. There is genuinely a character called Limping Lucy. Which to me sounds like Northern English slang for something lewd. “He gave me a Limping Lucy and then fell asleep!”

8. There is a brilliant lampoon of a self-righteous spinster who spends her entire life shoving pamphlets about sin under the noses of others. I’m tempted to highlight these passages and pass them on to those earnest elderly ladies who stand in the street handing out fliers with titles like, ‘Jesus is your friend!’ and ‘SIN!!!!!!! [sic]’. Would that make me just as bad as them? I’m tempted to say worse. Definitely worse. I’ll just have to enjoy the parody in peace.

9. Judging by other reviews, people’s favourite character seems to be the family’s old butler, Betteridge. (Ketteridge?) If you ever want to know what upper-class Victorians actually thought the lower classes were like, read Butteridge’s narration. He’s in turns bumbling, fawning, and narrow-minded (in other words, the perfect person to run for office. He could be Lord Mayor by the age of sixty-seven).

10. And, don’t, for the love of god, ask him about ROBINSON CRUSOE. Just don’t do it. Seriously.

12. I should note that in a surprising twist for a book written at the height of British Imperialism, the diamond does, eventually, return to its rightful home in India. It may take several decades and one slightly messy murder, but it gets there. No harm done, right?

6 replies on “All the Things I Remember About The Moonstone (1868), by Wilkie Collins”

Ooooh, I didn’t know there was a recent BBC adaptation of this. SOUNDS GREAT. A friend of mine gave me The Moonstone for my thirteenth, I think, birthday, and I have been a Moonstone stan ever since.

Yeah, the series was made last year, I think. From what I remember they did some inter3sting things with it.

This is how all reviews should be written. It is so much more fun than a straight review. But maybe I just say that because I am bad at writing straight reviews?

Have you read The Woman in White? I prefer it to The Moonstone though I must admit that I haven’t read The Moonstone in a scary number of years. Also, I didn’t know there was a BBC adaptation. I might need to watch it–just to be reminded of the hero’s name.

Haha, thanks Jennifer! I genuinely had no idea what to write considering I’d read it so long ago. I haven’t read The Woman in White, but I did read The Law and the Lady years and years ago, and I seem to remember I liked it.

I’m going to show my age here and say that I remember the BBC adaptation — the one from the 60s — and all I recall from that was murky atmosphere and murkier storyline. Being in my teens I gave up on the book after the first chapter: the impatience of youth! Anyway, loved this review and even encouraged to try it again!

I didn’t realise there were so many adaptations! I know there’s one from the 1990s as well – it seems Willie Collins is more popular than I thought! I hope you enjoy the book of you do decide to read it again.