I’m a sucker for a good Jane Austen adaptation. In fact, I think I’ve seen just about every one in existence, apart from those awkward 1970s BBC ones that are about as exciting as cohabitation with Mr Collins. So, naturally, this week’s Classic Remarks topic is right down my alley. But since I’ve been watching Austen adaptations since I was about thirteen, it’s kind of tough to pick my favourite. So, instead, I’ve decided to group my selections to cover all the bases you might use for evaluating an Austen adaptation.

I’ve already written a review of it, so I won’t bang on too long, but I think that in terms of creativity, Patricia Rozema’s 1999 Mansfield Park takes the prize for the most creative engagement with the source material. I know a lot of people hate this version, because it’s a pretty grim take on Austen’s novel which takes a lot of licence with the original, but I’m very impressed with the intellectual engagement present in this film. It’s not the most enjoyable of viewing experiences, but it’s very interesting creatively, and although it may require a little more effort, it’s well worth it. 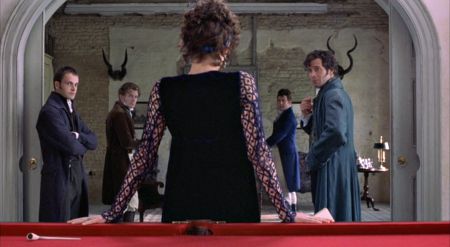 You hear a lot about adaptations of Pride and Prejudice, Emma, and to some extent Sense and Sensibility. But if there’s an Austen adaptation that doesn’t get as much press as it deserves – well, actually, it would probably have to be a tie between the 2007 Northanger Abbey, with the tireless Andrew Davies as screenwriter, and the 1995 Persuasion. Northanger Abbey could give 1995’s Pride and Prejudice a run for the title of ‘Sexiest Austen Adaptation’, although it’d still probably lose. But it’s a great adaptation of one of the least-filmed Austen novels. As for Persuasion, this BBC production manages to capture the more mature, pensive mood of Austen’s later novel perfectly. It’s understated, intelligent, and secretly wonderful – much like its heroine, Anne Elliot.

I love re-watching the 1996 Gwyneth Paltrow Emma – not because I think it’s the best adaptation of Emma (personally I think the Kate Beckinsdale version was a bit more understated but perhaps a bit better acted and written) – but because it was the first Austen adaptation I ever watched, and may perhaps be responsible for my Austen obsession in the first place. There you go. If you need someone to blame, blame Douglas McGrath.

Okay, I’ll admit it, this one’s a complete tie. Because to be honest, I can’t decide between Clueless (based on Emma) and Bride and Prejudice (based on Pride and Prejudice). Both movies are funny, clever, and enjoyable to watch. Clueless sets Austen’s Emma in an American high school, and is so delightfully 90s it makes me want to cry (Cher’s computerised closet, the ridiculous outfits, the grungy skater kids – sigh. What a time to be alive). Bride and Prejudice is a Bollywood-inspired take on Pride and Prejudice, and highlights cultural difference as a key point of friction between the Darcy and Elizabeth/Lalita characters. Plus it has incredibly catchy tunes. Seriously. I only have to listen to about ten bars of ‘No Life, Without Wife’ and it’s stuck in my head for days afterward. You’ve been warned….

What I think makes these modernisations so great is that both of them have fun with the source material and with the characters they create. They’re both joyful and playful and embrace the ridiculous. And there’s not too many awkward moments where the screenwriters desperately try to make an Austen plot point work in the twentieth/twenty-first century. They play fast and loose with Austen’s plots, and it works. They may seem like fun, relaxing comedies on the surface, but like Austen’s novels themselves, both movies actually use comedy to explore contemporary issues in a clever way. And now… I’m off to re-watch Bride and Prejudice, and hopefully stop humming ‘No Life, Without Wife’ under my breath.

Come on. You knew it was coming. Where else would the 1995 Jennifer Ehle/Colin Firth Pride and Prejudice adaptation be? Despite the wealth of interesting and fun Austen adaptations out there, somehow I always seem to come back to this one as the cream of the crop. It’s probably not surprising. This adaptation set a new standard for Austen on-screen, and it’s come to define our understanding of what ‘Jane Austen films’ look like. It’s well-acted, well-scripted, and well-filmed. But 1994’s Sense and Sensibility follows close behind. Emma Thompson won an Oscar for the screenplay, and it’s easy to see why. It picks up on the joyful energy of mid-nineties literary adaptations (think Much Ado About Nothing, for example) and plays around with historical details and sub-plots that don’t necessarily catch your eye in the original novel. These two adaptations have just come to define the genre. With strong female leads and smart scripting, they’re an excellent example of toeing the line between entertaining and intellectually stimulating.

15 replies on “Adapting Austen: A Roundup of My Favourite Austen Adaptations”

I must watch Mansfield Park again, having seen it before I read the novel. The play within a play sequence makes more sense after reading! I missed Northanger Abbey when it came out and keep looking out for a TV showing. Austen’s last two novels I’ve yet to tackle — and enjoy — so I may wait before watching!

You don’t mention the recent Love and Friendship (based, confusingly, on Lady Susan) but I’m looking forward to that when it airs on terrestrial tv.

My favourite? I enjoyed Bride and Prejudice, certainly, and Clueless, but my money’s on Sense abd Sensibility. I can’t stand Keira Knightly, so the less said about her Austen heroine the better …

Sense and Sensibility is definitely a great adaptation. I’m also not a fan of the 2005 Pride and Prejudice. I don’t think Kiera Knightley was a very compelling Lizzie Bennet, and the whole film seemed to be embracing more of a Brontëesque aesthetic rather than an Austen one.

I did see Love and Friendship, and really enjoyed it – I’ve only seen it once, though, so I’m not sure how I’ll feel about it as time goes by. It may well end up being one of my favourite Austen adaptations, though. :)

Oh man, I remember my friends and I constantly watching 2007 Northanger Abbey… Oh Mr Tilney, so much swooning!! And even though it has probably the most painful on-screen kiss of all time, I do enjoy the Sally Hawkins Persuasion. Though the fact that it’s my have Austen book probably has something to do with it.
Haha, I think I know all the lyrics to every Bride and Prejudice song… TOO GOOD!!!!

Haha, yes, the songs in Bride and Prejudice are just brilliant. :D I loved J.J. G
Fields as Mr Tilney, he managed to capture the spirit of the character so well.

I’ve only seen the Sally Hawkins Persuasion once or twice – I seem to remember liking it, although not as much as I liked the 1995 one. Not sure why, since I seem to remember both of them stay fairly true to the book and have similar styles. Persuasion seems to work very well onscreen in general, maybe because Anne is such a sympathetic character. :)

I want to see Bride and Prejudice – Clueless is one of my favorites too. I agree, I think that adaptations that have fun with the material and go off in unexpected directions, rather than somewhat glumly and pedantically transferring it to the modern era, are the most successful.

I don’t know why, but sometimes I find it funny that Mansfield Park even got an adaptation. Even with Austenmania, Mansfield Park and Northanger Abbey are constantly overlooked, and Mansfield Park is notorious for being (comparatively) long and boring with a boring protagonist (not that I necessarily agree–but that’s its reputation). But someone decided to give it a movie anyway.

I find it interesting too! I think Rozema’s film came out on the back of an upsurge in postcolonial criticism, though, and so I think it was marketed as being a darker version of Austen, one that engaged with the historical context a little more. Honestly, considering the playful tone of Northanger Abbey, I’m surprised more attempts haven’t been made to film it. The engagement with Gothic fiction allows for a few more risque scenes (as the 2007 version demonstrates!) and as we all know, sex sells. Plus the 2007 version came out at about the time that Twilight was getting really popular, and given that the Twilight phenomenon shares a lot of features with nineteenth-century Gothic fiction, it was quite a relevant adaptation in a lot of ways.

Yeah, I did find it interesting that the film chose to highlight colonialism. I didn’t know it was being marketed as a darker version–it seems to me that this is something that would have always been in the background of the work, anyway. And, as you note, Austen adaptations have been adding sex, so adding other elements that Austen glossed over perhaps shouldn’t be that surprising.

Oh how I love an Austen adaptation. My favourite is the 1995 BBC Persuasion adaptation starring Amanda Root, followed closely by the 1995 P&P.

I LOVE the Jonny Lee Miller Mansfield Park adaptation, it gives me all the feels and I just love the way it’s handled/shot. I’m even okay with them sexing it up.

The 1995 Persuasion is so great! So is Mansfield Park, I think they definitely did a great job with the design and scripting of the film. :)

[…] of the first things that leapt to mind was Jane Austen, but since I’ve spent a lot of time banging on about Austen adaptations already, I thought I’d branch out and discuss something different (I know, I’m also surprised I […]

[…] Sense and Sensibility (1994) – As I mentioned in my post on Austen adaptations, this is definitely one of my favourites. Emma Thompson does a fantastic job with the screenplay, […]

[…] could talk about this all day. And I already have when it comes to Jane Austen adaptations, of which there are too many to list here. I’ve also written about my favourite adaptations […]