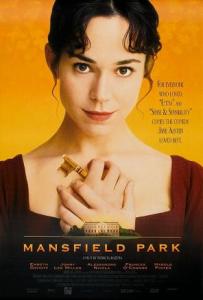 Last year I re-read Mansfield Park. And made a surprising discovery.

I actually liked it. All those years of avoidance, staring at it on the shelf and wondering whether it would ever do anything more other than round out my collection of Austen’s work – what a waste.

So when I found myself loving the book, I naturally wondered whether perhaps my younger self had also been unfair on the movie adaptations of the novel. In particular, the 1999 version directed by Patricia Rozema. So I tracked it down and gave it another go. And what I found was, if not the most enjoyable viewing experience (or, indeed, true-to-the-book adaptation), at least a thought-provoking one.

The 1999 version of Mansfield Park is a darker, more sombre version of Austen than those made earlier in the decade. This turn-of-the-millennium Austen hints at the changes that are going to begin appearing in Austen adaptations of the noughties: an interest in the grungy, the suppressed; in sex, and in the characters who frequently hover on the periphery of Austen’s narratives (domestic servants and, in this particular adaptation, slaves on the sugar plantations owned by the Bertram family). Although we never really see either slaves or servants, these individuals are conspicuous in their absence.

The design of the film is muted, colours dull, and sets dilapidated. The flaking walls of Mansfield Park in this version are a precursor to the chaotic rendering of Longbourn in the 2005 adaptation of Pride and Prejudice, where pigs run through the hallways and where the lives of servants and masters collide constantly.

It’s a far cry from the neat and well-organised interiors of the BBC’s 1995 Pride and Prejudice, and the joyful and energetic productions of Emma during the same period (both the BBC version and the movie version). And while Mansfield Park is still understood to be a grand home belonging to a wealthy family, its interior décor is a constant hint at the issues being explored throughout the film.

The interiors of Mansfield Park are dilapidated, large, and cold. Exposed brick walls and crumbling plaster suggest, on the surface, neglect or poverty – a wealthy family whose star is on the decline. But this décor (or lack thereof) is also intimately related to the way that the filmmakers approach the source material. This is Austen stripped back, with all her ugly interiors exposed. The quintessentially English writer, with her country houses and wholesome countryside settings, has much hidden beneath the surface – and not all of it is flattering.

Of course, this is to perhaps take Austen’s work a little too seriously; which is why Mansfield Park, her most serious novel, is perhaps the most likely text with which to begin an exploration of the ‘hidden’ Austen.

This movie takes many cues from post-colonial readings of Austen’s novel; it is clearly influenced by Edward Said’s discussion of slavery and the way that the issue is handled in Mansfield Park. Slavery is, of course, a central preoccupation throughout the film; yet at times the filmmakers must stretch the source material quite a bit in order to explore this issue. The film is removed from the realities of slavery; we are never given a glimpse of Sir Thomas’ plantation or the slaves who live there (other than in the horrifying drawings Fanny finds later in the film). On the one hand, this removal is in itself a comment on the way that the early nineteenth century viewed slavery. At one remove from the realities, characters in the movie don’t even possess the vocabulary necessary to discuss the issue; conversation quickly peters out when Edmund and Fanny try to raise the topic.

And while there are some characters in the film who speak out against the practice of slavery, their efforts are weak and ineffectual. Tom Bertram’s bad behaviour towards his father is refigured as a kind of rebellion against the atrocities he witnesses when he accompanies Sir Bertram overseas, to visit their plantations. But although Tom makes angry remarks about his father’s behaviour towards the slaves, he has little real drive to change his father’s mind, and shows no desire to engage with the issue politically.

When Sir Bertram returns to Mansfield Park, Tom emerges with his face covered in black paint. He has been preparing for the theatricals, but his appearance shocks his father. On the one hand, Tom’s makeup is a reminder of what Sir Bertram has been doing while he has been away. But on another level, the tasteless makeup also suggests that there may be an element of hypocrisy to Tom’s moral outrage. Is it true disgust for the institution of slavery, or is it simply an excuse to clash with his father? Later in the film, Tom’s drawings of the atrocities that occurred on the plantations seem to suggest that there is a level of genuine concern for the slaves; but what his character makes clear is that even those who were sympathetic to abolition would often suppress their concerns for selfish, or political, reasons.

The film is deeply concerned with issues of morality. The state of dilapidation evident in the house is directly related to the morality of the characters who occupy those spaces, and as such it fluctuates as the story progresses. While the house appears, on the outside, to be a spectacular country house, on the inside it crumbles. There are no colourful wallpapers, thick rugs, or bright colours to liven up Mansfield Park; the house reflects the misdeeds of those who occupy it. Sir Thomas is frequently shot against exposed brick walls, and his office is dominated by antlers hung on the wall. The production of Lover’s Vows is rehearsed in one of the most dilapidated areas of the house. And although the ball seems to be held in a more elegant room, as the camera pans out we see a brick wall which has been painted over for the occasion. How appropriate that Henry Crawford should choose this moment to begin his pursuit of Fanny in earnest.

In contrast, Fanny’s attic room, though small and cold, is painted with a warm, reddish colour, and is furnished with simple but comfortable items, signalling Fanny’s difference from the other characters at Mansfield Park. She does briefly succumb to Henry Crawford’s charms; but it happens in Portsmouth, in the dirty and disordered home of Fanny’s parents, where she is banished by Sir Bertram and forced to confront the possibility that Edmund and Mary will be married.

While in Portsmouth Fanny has a discussion with her mother. Interestingly, the film uses the same actress to play both Lady Bertram and her sister, Mrs Price. Although the film does not discuss these two women or their respective marriages (they are the focus of Austen’s opening paragraphs in the novel), while Fanny is in Portsmouth her mother – tired-looking and unkempt, in stark contrast to the dozy but impeccably turned-out Lady Bertram – issues a warning to Fanny: “I married for love”, she tells her daughter warningly. On the one hand, this doubling hints at the realities faced by women in Austen’s time, an idea which hovers on the edge of all of her novels; for most women, there is little choice but to marry for money. ‘Love’ can be as much of a trap for women as a marriage of convenience. On another level, however, this doubling of mother/aunt touches on something that is explored in more depth in the book; Lady Bertram’s responsibility for Fanny and the children under her care, and her inability to effectively take on that responsibility.

Marriage remains a central preoccupation throughout the film. But it dwells more on the consequences of unhappy marriages, and the film also makes several connections between its discussion of slavery and its concern with marriage. Fanny tells Henry Crawford that “Woman’s poverty is a slavery more harsh than a man’s”; it is unclear whether she is thinking of her mother when she says this. Later on, we see Maria Rushworth after her encounter with Henry Crawford; she challenges her brother not to judge her actions, announcing, “Rushworth is a fool and I can’t get out. I can’t get out”. The married women present in the film all seem to be struggling with a sense of entrapment. But Fanny appears to be different; the film ends with Edmund telling Fanny that he has found a publisher for her stories. This added element of Fanny-As-Writer allows the character a measure of independence in a film which chafes against the restrains placed on human beings by institutions such as slavery or marriage.

The film ends with Fanny and Edmund discussing her career as a writer (her work is directly taken from Austen’s juvenilia; the decision to conflate character and author is problematic, and would probably require a whole other post to discuss). The pair circles round the exposed roots of an enormous tree which has collapsed on the grounds. This same tree is present in an earlier scene, when the Crawfords are first introduced.

The tree hints at the experience of being uprooted: it hints at the lives of the slaves, of the women who leave their families to be married, of Fanny herself, uprooted as a little girl and forced into a new soil. It also suggests the influence the Crawfords will have on the characters in the film; their presence will forever alter the family relationships at Mansfield Park. As Edmund and Fanny circle around the tree again in the film’s final moments, the viewer is left to wonder whether the exposed roots signal that Edmund and Fanny have been uprooted once more, or whether Fanny herself has finally been able to counter the experience of dislocation and find a sense of belonging. Whether it is through her writing or her marriage (or both), the film can be seen as optimistic about overcoming this experience, even if it is not easy.

I’m thinking Mansfield Park needs to be my next Austen read. And I should watch movie again as well. Not exactly a faithful adaptation, but you make some interesting points.

Really great review. I haven’t seen this film yet. Love your thoughts on the tree & the statue.

Such a good review of one of my guilty pleasures. I think I’ll be watching it with a different​ eye next time.

I know it’s not as popular, but I also enjoyed Mansfield Park and thought Fanny was an interesting character. I haven’t seen this movie, but really want to watch it now!

Fanny is definitely an interesting character! One of the things I didn’t like about the movie was that they mixed up Fanny with Austen, and made her into an aspiring writer, which isn’t really true to the book.

[…] already written a review of it, so I won’t bang on too long, but I think that in terms of creativity, Patricia […]