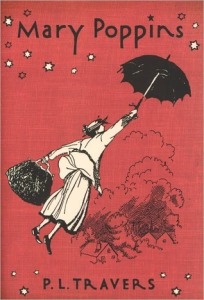 Well, hello! I do hope that everyone had a lovely Christmas, filled with all sorts of pleasant things. I’m here with a review (finally) of the last book on my Back to the Classics list. After a year with a number of grim reads – All Quiet on the Western Front and Nineteen Eighty-Four, to name just a few – I was glad to finally reach this point. Mary Poppins seemed like the perfect book to end with, promising fun, laughs, and a little magic.

I’m sure that the character of Mary Poppins is familiar to many, thanks to fond childhood memories of Julie Andrews, magic umbrellas, and… dancing hippos? Or was it ostriches? I forget. My sole exposure to the Disney film was a trailer at the beginning of my video copy of The Lion King. At the time, Simba and Nala seemed to me to be infinitely more interesting companions than a singing nanny with a funny hat. Perhaps partly because I didn’t really know what a nanny was yet, and the animated African plains seemed much more interesting than London’s rooftops.

Oh, how times change. Now, of course, I’m glad that I somehow managed to miss out on the film version of Mary Poppins. It made reading the book all that more interesting, because I had no idea what I was getting myself into, apart from maybe the one image that stuck in my head, that of a singing chimney-sweep (absent from the book, which I’m sure is the case with many more of the movie elements). So I borrowed the book from my local library (feeling incredibly awkward walking into the kid’s section of the library, a childless adult, while a snotty little boy watched me, fascinated, as I plucked Mary Poppins off the shelf and hightailed it back to the young adult section. This experience led me to deduce that I am not yet mature enough to read children’s books without caring what others think of me, a sad realisation indeed). But my embarrassment at potentially being seen by other adults borrowing a children’s book wearing off, I finally began reading P.L. Travers’ famous book.

The story is a familiar one; kids hate their old nanny, old nanny leaves (hooray!), new nanny shows up in mysterious circumstances, new nanny has magic powers, kids love new nanny, new nanny eventually leaves. There are twelve short chapters in the book, and each is episodic in nature. In each one, something strange and magical happens. Mary Poppins and the Match Man go into a chalk painting and have tea. The children and their nanny visit Mary Poppins’ uncle, and have lunch with him on the ceiling. The visit the zoo after hours, and talk to the animals. It’s all wonderfully good fun. My favourite story, however, was one about the two youngest children, who are still babies. While their elder brother and sister are absent, they have a wonderful (and very well-spoken, given that they are only one year old) exchange with Mary Poppins, a strip of sunlight (I know, trippy) and a skylark that lands on the windowsill. The babies are amazed that their elder siblings don’t know how to communicate with the birds, the West Wind, and the sunlight. And when the skylark informs them that very soon they, too, will forget how to do these things, they are shocked and horrified.

“Huh!” said the Starling contemptuously. “Look at ’em! They think they’re the World’s Wonders. Little miracles – I don’t think! Of course you’ll forget – same as Jane and Michael.”
“We won’t said the Twins, looking at the Starling as if they would like to murder him.
The Starling jeered.
“I say you will,” he insisted. “It isn’t your fault, of course,” he added more kindly. “You’ll forget because you just can’t help it. There never was a human being that remembered after the age of one – at the very latest – except, of course, Her.” And he jerked his head over his shoulder at Mary Poppins.

Mary Poppins is, according to the Skylark, “the Great Exception” (Chapter IX). And although the Twins refuse to believe him, when the Skylark returns later on, he finds that they have, indeed, forgotten how to speak with him. It’s somehow quite moving, as the Skylark looks down at the babies and all they can do is gurgle back at him.

But despite the babies’ moment in the spotlight, the story really belongs to the children, Jane and Michael, and most importantly, to Mary Poppins. Mary Poppins seems to be, as the Skylark so nicely puts it, “the Great Exception”. She is a complete mystery – we don’t know where she came from or where she goes at the end of the book. We don’t know how she does what she does. We don’t even know if Mary Poppins is her real name, when you think about it.

So just who is this so-called caregiver? Why does she refuse to give the children’s mother references when she first arrives? Does she have any qualifications? Is she even (dare I say it) real?

If you’re expecting a ‘good fairy’ (as the cover of my copy suggests), or a loving maternal figure, or someone cuddly and funny, you’ve probably come to the wrong place. Because Mary Poppins can be downright mean. She scolds the children, orders them about, refuses to answer their questions, and is generally bossy. The only thing we know for certain about her is that she is vain; she is continually checking her reflection in mirrors and windows, admiring her new hat or gloves. You could be forgiven for thinking that she doesn’t even really like children.

And yet the kids seem to see through all that. Perhaps they recognise something in her that isn’t immediately obvious; we are told that “There was something strange and extraordinary about her – something that was frightening and at the same time most exciting” (Chapter I). And although she can be short, and strict with the children, it soon becomes obvious that she is fond of them, in her own way. And the children don’t seem to hold her personality against her; they’re fiercely attached to her and devastated when she leaves. She may be strict, but it’s clear that she’s just the sort of nanny they needed.

Despite her little vanities, her air of mystery, and her scolding, you can’t help but like Mary Poppins. She is an enigma, and she doesn’t let on much by way of who she is or how she came to be a nanny. The most important part of the story is that she is magical, wonderful, and exactly the sort of nanny that almost any kid would like. To me, she seems an almost rebellious character; Travers seems to suggest that the traditional idea of the ‘maternal’ – the soft, kind, endlessly patient carer depicted in countless Victorian novels and still alive today – is not the only figure children are drawn to. Mary Poppins is tough, but she gets the job done – and the kids love her for it. She’s the sort of character that keeps you wondering, and keeps you coming back for more.

[…]  A Classic That’s Been Adapted Into a Movie or TV Series – Mary Poppins, by P.L. Travers Completed; review here. […]

Ah, you’ve inspired me to read this book! I’ve heard that Travers’ biography is excellent as well. She was a unique and rather forceful person; her bio would probably make for interesting reading.

I think the terror of the children’s book section stems from school memories. My daughter learned to read early but whenever she wanted to take out a book that was, what the librarian thought, above her level, the librarian wouldn’t let her. Completely silly! So now, whenever we want to do something unique, there is an uncomfortableness of stepping outside of people’s expectations. I guess the only thing to do is to learn to be a rebel. ;-)

Haha, definitely Cleo! I do remember wanting to borrow books that were ‘above my level’ when I was little, too… luckily our librarians weren’t very strict.

Travers definitely sounds like an interesting person; I didn’t know there was a biography of her, but I might give it a go. I remember watching a bit of a program which mentioned that she had been very secretive about her past, until it was revealed that she actually grew up in Australia. It’s funny, because you definitely wouldn’t associate Mary Poppins with Australia!

Really interesting, Majoring. Another one to add to the list!! Happy new year to you! :)

I remember being a little scared when I read the first book as a small child because Travers was definitely a much darker character than Julie Andrews version of Mary. It didn’t take me long though to become addicted to the series and it remains today one of my favorite childhood series :) What a lovely review, and marvelous picture of the Mary Poppins bench. Thank you for sharing. You’ve made me quite nostalgic!

Thanks! I definitely have to watch the movie… I’m very curious to see how Andrews made the character her own. :)

[…] ago I was supposed to read P.L. Travers’ Mary Poppins, and then watch the film version. Well, I did one but not the other, so I’m here today to rectify that in a new segment that I like to call A Lit Major At The […]