A few months ago I read Orhan Pamuk’s Istanbul. I’d been meaning to read something of the Nobel laureate’s work for years, but I’d always expected to start with something like My Name is Red or Snow. I read Istanbul on a whim and was instantly fascinated by Pamuk’s description of a city coloured by the experience of hüzün, or ‘melancholy’.

Then, a few weeks ago my sister and I began planning our trip to Greece, and though neither of us had proposed it, somehow we found ourselves deciding to stop in Istanbul for a few days. Both of us being fans of preparedness when it comes to travel (i.e., paranoid) we spent days reading about the city and its environs. By the time we actually landed we were so full of travel articles urging caution for female travellers in Turkey that we were beginning to regret our impulsive decision to go at all. Pickpockets, harassment, avoiding the city at night; it’s probably not surprising that we scurried back to our hotel as soon as dusk fell on our first night there.

The next day we stepped cautiously outside and began our wanderings. The city was peaceful. The talkative salesmen and restaurant owners had yet to emerge from their respective establishments. Most of the tourists were still sleeping and the stray cats were almost the only company we had that first hour of the day. It only took a little while for us to relax. The tourist area was lovely; beautifully spaced out, you find yourself standing with the ancient Hagia Sophia on one side and the regal Blue Mosque on the other. We spent the morning visiting these main sights and, sufficiently confident by lunchtime that we would make it home alive, crossed the Galatea Bridge.

As we headed towards Taksim Square we passed by the Pera Palace Hotel, which played host to several well-known faces, including Ernest Hemingway and Alfred Hitchcock. The Pera Palas was built to accommodate passengers from Europe travelling on the Orient Express, and… well, you might be able to guess where I’m going with this.

Yes, the Queen of Crime Fiction stayed in the Pera Palas Hotel; it’s even rumoured that she wrote parts of Murder on the Orient Express here. As a great Agatha Christie fan, it was rather a thrill. Sadly, we didn’t have time to have a look inside, though apparently it is quite impressive.

After an unrushed lunch in a comfy café, we headed down a small, steep street. It was far away from the rush of the main shopping streets and lined with tall, narrow houses and small shops. Our next stop? The Museum of Innocence.

The Museum of Innocence is something I’ve wanted to see ever since I read Orhan Pamuk’s novel of the same name. The story centres around a man who falls in love with a young woman; when she marries another man he spends years collecting mementos and objects that belonged to her or remind him of her in some way. The end of the novel has him establishing a museum to the young woman’s memory, where he displays objects of hers that he collected over the years.

The real-life Museum of Innocence was created by Pamuk and opened in 2012. It’s situated in a red house on a quiet little street. The collection is spread over four floors and is made up mostly of individually-crafted boxes where objects are displayed in an order roughly similar to the events of the book.

We both took audioguides; without them I think it would be difficult to appreciate the significance of the exhibits, because so much of what is displayed there relates to the significance of storytelling and individual stories. Interestingly, the audioguide presents the events of The Museum of Innocence as if they were real; at times Pamuk speaks about the characters as if he really met them. This pretence that the book can be confusing, but it does make for an interesting experience as the lines between truth and fiction begin to blur.

The museum evokes an image of Istanbul in the 1970s and 1980s, before the outbreak of nationalistic fighting. It’s interesting to see because it’s clear how powerful Pamuk’s idea of Istanbul during this time is to his writing. It gives you an excellent idea of the issues that interest him when it comes to his books. One of the most powerful exhibits for me was a case which displayed photographs of a large collection of women, all of whom had a thin, black strip over their eyes, obscuring their identities. These photographs accompanied articles in Turkish newspapers; whether it was a story about a woman being raped or just about a society lady, photographs of women in newspapers were rarely published without these additions. The only pictures of women without black strips over their eyes in those days, says Pamuk, were actresses and beauty contestants. Turkish society of the time saw them as lacking ‘virtue’ because of their professions and so there was no need to protect their modesty by obscuring their identities. It really helps to explain the context of the novel, as well as demonstrating the nature of Turkish society at the time the novel is set. 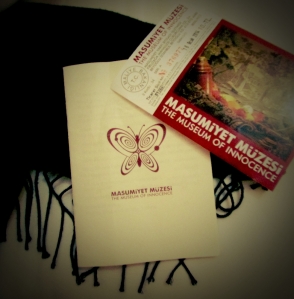 At one point in the audioguide, Pamuk says that when putting together the exhibits for the Museum of Innocence, he had the ‘choice’ to present each object in the collection in the simplistic, sterilised way that large national museums do, or he could present them as ‘works of art’. Each box is designed with a different theme in mind. Although the events of the novel are largely fictional, the museum claims that Pamuk began collecting objects that inspired him to write the story for more than ten years before the book was actually published. He would apparently comb second-hand shops around the city for objects that he felt related to the plot. The novel and the museum were, according to Pamuk, always supposed to go together. It’s clear that the organisation and function of museums is an important issue for Pamuk. Having visited many different museums in the past few weeks, both large and small, I can definitely understand his fascination with the subject. If nothing else, I would appreciate the museum for this reason alone. But it is both cleverly conceptualised and beautifully put together. It was a fascinating glimpse into Turkish culture, as well as a glimpse into the mind of a very accomplished contemporary novelist. We only had a short time in Istanbul, but I wouldn’t have missed this museum for the world.

One reply on “Melancholy and Innocence: One Day in Istanbul”

[…] of Innocence in Istanbul. I’m pleased to say this is one of the few things on my list that I’ve actually done. When I read that Pamuk had established a museum based on his 2008 novel, I knew I just had to see […]